Get me outta here!

The Fort Pitt Tunnel that Charlie goes through. This symbolizes him getting to see the light at the end of the tunnel, and his character development blossoming throughout the novel.

Here I am writing my second blog post, and all I can say is that I don’t want this book to end. Ever. I rarely read books out of pure enjoyment because usually, they don’t resonate with me. But the perks of being a wallflower by Stephen Chbosky has changed my opinion and has reinspired me to search for good books again. While there are many enjoyable things that I could analyze about this book, the one thing I am excited to delve further into is the book’s symbolism and how it ties into Charlie’s, the main character’s, transformation: this is, after all, a coming of age story. I haven’t finished the book yet, but so far Charlies has been to the famous Fort Pitt tunnel in Pennsylvania twice. For one of the times, Charlie is just in the car admiring his crush and friend Sam. But the second time around he is the one in the back of the truck. Charlie raises his arms high as the truck drives magnificently to the end of the tunnel. I think that Chbosky was playing on the phrase “the light at the end of the tunnel,” which is cheesy but still ties into Charlie’s journey in the book. An example of the tunnel correlating with Charlie’s character growth is when he says “When we hit the tunnel, all the sound got scooped up into a vacuum… Lights on buildings and everything that makes you wonder. Sam sat down and started laughing. Patrick started laughing. I started laughing. And in that moment, I swear we were infinite” (Chbosky 26). This moment reveals that Charlie finally feels happy and as if life is worth living for, almost as if he sees the light at the end of the tunnel. At the beginning of the novel Charlie is very much isolated from the world and is saddened; now, he is blossoming and feels infinite, displaying the tunnel’s effect on him.

Charlie writing that he feels infinite when he goes through the tunnel with Sam and Patrick. The beginning of his character development and him breaking out of his shell.

Like I said earlier, Chbosky has done a really nice job on this novel and there’s not much that I would disagree with. There are aspects of the book that I enjoy more than others, though. For instance, the novel’s point of view or how the book is actually organized is genius in my opinion. The whole book is actually a series of letters from Charlie where the reader is addressed as “Dear Friend.” Charlie is writing letters to a person who may understand what he is going through, and he shares his innermost thoughts that a reader wouldn’t get if the novel was in a third person point of view. This is Charlie’s story after all, and the book’s focus is on how he changes as a person, and it is amazing that the readers get to witness it first hand through his eyes. Also, the letters or the way Chbosky chose to organize the novel is structured in a way that lets readers take something away from Charlie and it gives readers an opportunity to look at Charlie as a mentor of sorts. Charlie states in his letters that if he can survive what he went through, that the reader can too. The letters form a personal bond with the reader and give anyone reading, including me, an immense amount of hope. I felt like I knew Charlie personally and that he was there for me even if no one else is. I really like that Chbosky formatted the book this way with a personal glimpse of Charlie’s world. He sees the world differently, and it puts everything in my own life into perspective.

If you ever do get a chance, please read this book! You will join Charlie on his rollercoaster of life and you will root for him through his happy and dark times.

Woohoo, my first blog post! I’ve never written or had a blog before, so I’m excited to start sharing my thoughts on the wonderful book, the perks of being a wallflower by Stephen Chbosky. I’ve only started reading this book, but I’m already halfway through it. It rarely happens, but when I really enjoy a book, I don’t put it down and read as much as I can in one sitting. The writing in this novel is all sorts of amazing, and I’d love to tell you all why. Look, even the cover is intriguing. 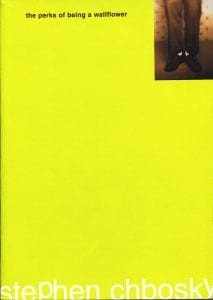 Let’s start with the main character: Charlie Kelmeckis. A freshman in high school who, as the name of the book suggests, is a wallflower. What is a wallflower you may ask? Well, there are two definitions, but only one of them apply in this context. The first definition of a wallflower is a southern European plant with fragrant yellow, orange, or red flowers. It sounds beautiful, but that’s not the definition we’re looking for. What we want is a human wallflower; in simple terms, this is a person who may not talk or be talkative, but instead observes others closely and sees the world around them in a drastically different light than most people. 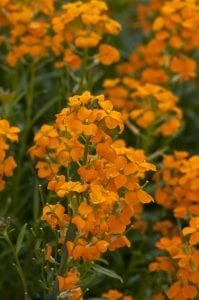 A literal wallflower. Different from a human wallflower, but both are still beautiful.

Since Charlie is a wallflower, he doesn’t have much social dialogue but instead expresses his thoughts through writing, which is one of the reasons I’m quickly falling in love with this book. The entire book is written through letters that Charlie writes, which lets the readers see Charlie’s inner thoughts on his world around him, which I think is spectacular. Another thing I like about this book is that although it’s a young adult book, the typical teenage cliches are balanced with real issues the characters face, and this book does a fantastic job of confronting issues, especially social ones. I don’t want to spoil anything but because of Charlie’s unique ability to see the inner conflict in others, many characters are given complex back stories or flaws, which only makes the reader more invested in Charlie and his friends. The book, the perks of being a wallflower, does not hesitate to show readers how ugly and cruel the real world can be, but this is not the dictating theme of the book as readers also experience Charlie being happy and in the moment. I think that’s one of the main messages or morals Stephen Chbosky demonstrates: no matter how difficult life is, there’s always little moments here and there that remind you that it’s all worth it.

I don’t know how to describe the main conflict of this book. The readers are given an inside look into Charlie’s chaotic life, and he experiences some sort of inner conflict every day. He experiences bullying from other kids because of his passion for literature and desire to succeed in school. He gets into trouble multiple times at school for simply defending his friends. I haven’t finished the book so I can’t say whether there is a climax or main conflict of this book just yet. What I do know is that through his trials of trying to survive high school, the readers see Charlie slowly starting to come out of his protective shell. He gains understanding friends (Patrick and Sam), and they really show him how to live life to the fullest. Charlie is like a caterpillar turned into a spectacular butterfly, and it’s just amazing to watch a troubled kid finally find a place where he feels like he belongs. There are certain scenes like driving under the famous Fort Pitt tunnel where Charlie showcases his character growth, but I don’t want to say too much. When I look at all that Charlie has to had to deal with (trust me, it’s a lot), I feel inspired because he doesn’t let negative things in his past affect his present, which I think is a good lesson. Of course Charlie isn’t like this from the bat, but he eventually learns this and learns to accept himself, and that is the most satisfying thing to read about.

The Fort Pitt Tunnel in Pittsburgh Pennsylvania. The same tunnel Charlie and his friends go through.

To finish off this post, I’d like to say that I can’t wait to finish this book but I’m also sad to finish it because it is so enjoyable. When reading this book I feel all sorts of emotions ranging from sad and in tears to smiling and laughing at Charlie’s comments. the perks of being a wallflower feels very real and not at all like fiction since the characters are portrayed as real people with substance, which is why I keep being sucked into this book. I’m excited to read what Charlie goes through next and how he handles it. Till the next blog post, thanks for reading and I’ll see you all later!